On the 31 January 1956 brand new Landy UTT 739, was bought from Elliotts of Bideford , by Mr J Huxtable from Narracott Farm, South Molton, Devon. Mr Huxtable, who was also a passionate horticulturist, enjoyed driving Landy to the local Farmers’ Market to meet up with his friends.

Landy was then sold at the Farm Sale in 1986 to Ted Marston. Ted was delighted to have found Landy  in perfect original condition, barring the addition of indicators.

Ted lived in the St Austell area of Cornwall and was at that time, an Education Welfare Officer. He would drive Landy around on his school visits, where Landy stood out among the other vehicles in the car parks.

Ted recalls, “Landy was not very fast but very reliable. I just loved that vehicle, so did my son. I’m so pleased that ‘Landy’ is now a hero!!!” 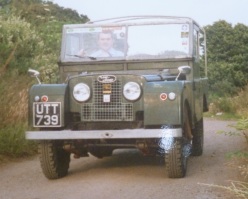 The first thing that went wrong with Landy, while he was with Ted, was that after a lot of stuttering and backfiring, he ground to a halt – his fuel pipe had gone!

In 1993 Ted sold Landy to Mick Moore, local independent Land Rover Engineer, and Mick has owned him ever since.

In November 2009, after a chance remark by a friend at a party, Veronica decided to write a children’s book about a Land Rover. She walked up the hill from her home in Wadebridge, Cornwall, to Mick’s garage to seek some advice. Mick was enthusiastic about her idea and he invited her to visit him at home where they could discuss her story.

On a cold November evening in 2009, sitting beside a crackling fire, Mick and Veronica started throwing ideas around. Veronica couldn’t decide which type of Defender Land Rover to write about when Mick suggested she take a look at his old Land Rover in the back yard.

Veronica was smitten! “That’s my character, I love him!”

And so the Landybook stories began…

Once Veronica has drawn up her storyboards, Mick gets Landy in position for his photoshoots. Mick also drives Landy to some of the school visits that Veronica does in Cornwall and other events further afield.